BUY ALL THREE BOOKS IN THE BLUES DOGS SERIES AND SAVE!

AND GET THE DOGGONE BLUES MUSIC CD AS A BONUS!

SCROLL DOWN TO BUY EACH  SEPARATELY! 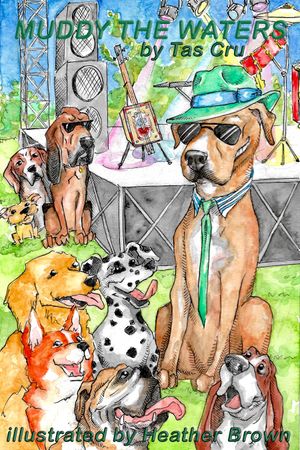 Finally, in this the last book of the Blues Dogs Trilogy,  Bad Dog Bubba, the Blood-Rhymes-With- Dude Hound is thrilled that his dream  to form his all dog blues band has come true!   With the help of his friends -  the energetic and upbeat Scooter, Betsy Ann the clever and determined former circus dog, and the dog-talking, bass-playing young woman BClef, the Doggone Blues Band is ready and eager to play the music that he loves!  Bubba was right when he told them the blues was like a half-eaten sandwich you find laying on the sidewalk – give it a sniff – you might like it.   Sniff away they did, and it smelled soooooo . . . good!!  The band of blues dogs – Ike, Beulah, Lizzy Lou, Murphy and Mr. Piedmont are  all rarin’ to go! But things get murky when a new blues dog comes to town!  This handsome, bold and talented young dog who shares his name with the all-time greatest blues man ever – Muddy Waters, works his mojo on the blues dogs as he plots to join the band and take over as its lead singer!   Muddy’s move challenges Bubba and his friends – Scooter, Betsy Ann and BClef to think fast before Muddy pushes on.  They worry he could try to take the band over completely.  What worries Bubba even more is that Muddy’s mojo might just be working on Bubba’s very own sweet Sylvia too!

Book three will showcase the band as it develops its repertoire of songs that Bubba writes about each of them.  These songs can be heard on the music album Doggone Blues, which is now available for purchase  - please return to the BUY TC MUSIC page on this site.

Purchase Muddy the Waters from Amazon! 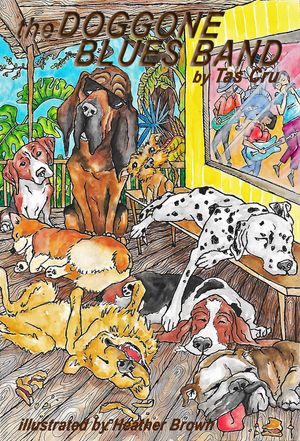 HERE IT IS  - THE 2ND BOOK IN TAS" BLUES DOGS SERIES

In this second book of the blues dogs trilogy Bad Dog Bubba is on a mission to form his all dog blues band.  Bubba enlists help from his blues-loving buddy Scooter and Bclef, the bass playing gal  from his owner's blues band.  Bclef's experience and more important, her ability to talk dog will prove vital to making Bubba's dream a reality as will Scooter's upbeat energy and unleashed enthusiasm!  Bubba has proven himself to be a skilled songwriter but does he have what it takes to make and lead a band?

This book introduces a pack of new dog characters - all would-be blues dog recruits who need some convincing.  Bubba's sweetheart, Sylvia returns to play an important role as the story unfolds. 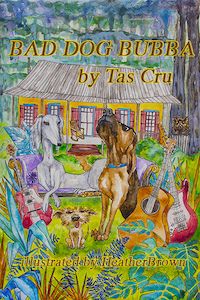 HERE IS THE FIRST BOOK IN TAS' BLUES DOGS SERIES

Bad Dog Bubba. is the first of a three books series about a dog, Bubba (a Blood-rhymes-with-dude-Hound) trying to get his pals to love the blues.  Bubba’s owner is a bonafide Louisiana blues man named Beau Beau Blue Hat Bobbie, who has instilled his dog with a love for the blues that he just has to share!  Bubba tells his friends, “The blues is like a half-eatern sandwich you find lying on the sidewalk.  Give it a sniff and you might like it!.”

This book introduces the main characters and sets the stage for the next book, which is about the trials and tribulations of forming a dog blues band.  Book three is about how the band, with its growing popularity, handles its success and struggles to stay on track with its mission to bring the blues to dogs all across the world!

The project stems from my 2016 music album, Doggone Blues, original songs about dogs who get the blues.  This was a fundraiser I did for the newly established Blues Foundation’s Blues Hall of Fame.  The dogs in each of those songs appear as characters in this book series. This album is available for purchase  - please return to the BUY TC MUSIC page on this site.

These books are made possible with support and encouragement from: